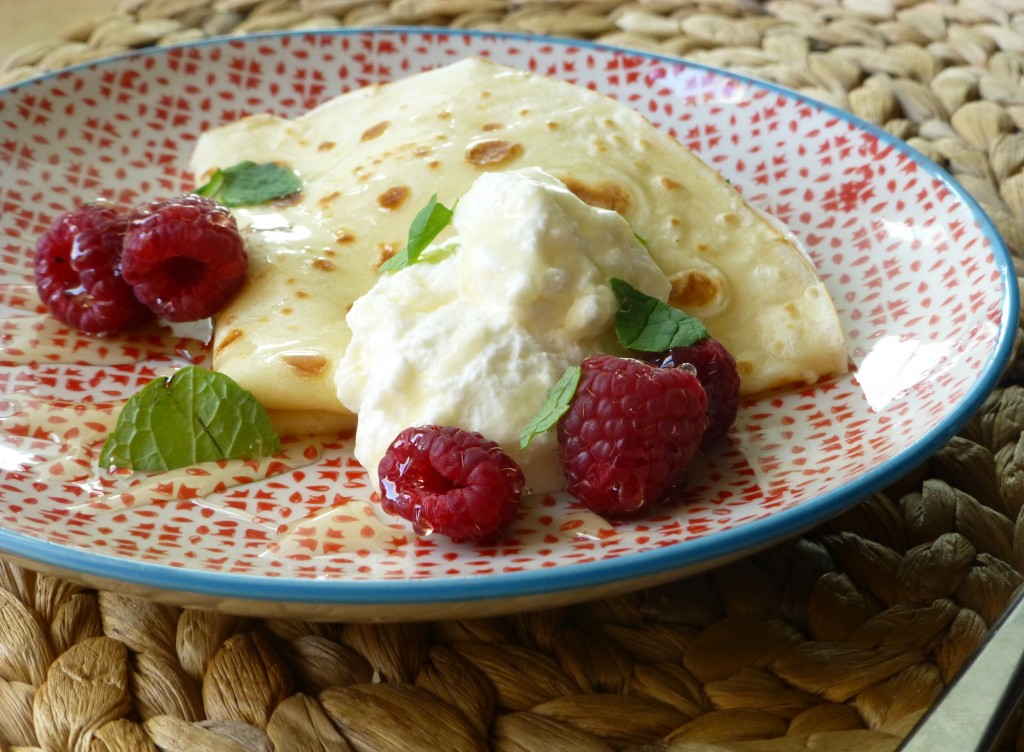 So I went backpacking with my sister, Teva, last summer. When we reached the summit we met another backpacker, who told us he had found the source of a stream. He said, “The water is so fresh you don’t even have to filter it!” We did just to be safe. He went around telling everyone. He was pretty proud of his discovery. I was expecting something a little bigger, but the source was a baby stream coming out of a rock, like water flowing from a half turned on garden hose. It might’ve been because we had been hiking all day, but the water was pristine. It was the best water I’ve ever tasted.

The moral of the story is: size doesn’t matter. And, it is best to get things straight from the source. News, produce, recipes, they’re all the same. You remember that game, telephone… Recipes change as they’re passed from one kitchen to the next. That’s why I wanted to share some recipes with you I picked up while traveling. 4 recipes from 3 countries, as close to pure as I can translate them.

I want to have a food truck one day and sell crêpes. Sweet and savory ones. I’d call it “Oh Crêpe!” And sell t-shirts that say, “I’m full of crêpe.” It has to be a food truck or street stand or something like that. Not a restaurant. A brick and mortar place would be too formal for a crêpe. I love how you can be walking down a street in Paris, and order a Nutella and banana crepe while you’re waiting for the light to turn. The vendor quickly folds it in a triangle, wraps it in some paper, and you’re off. Find a bench, a park, a lawn seat under the Eiffel Tower. What’s better than that? 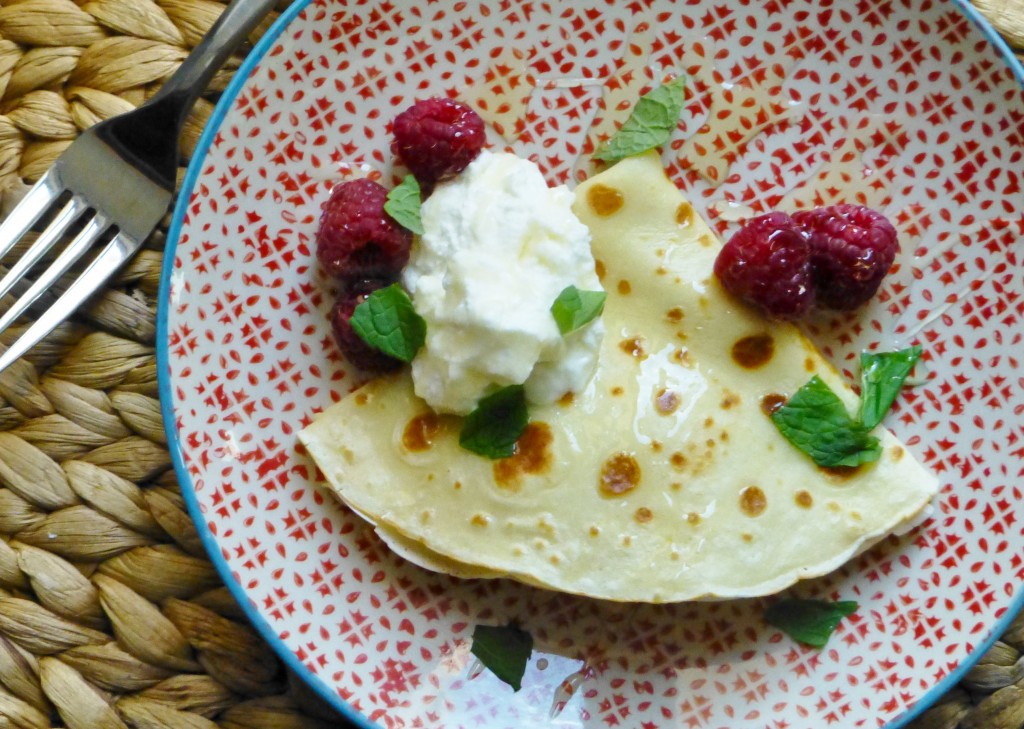 I don’t recommend getting a chocolat noir crêpe and eating it on the go though. It’s a crêpe filled with hot chocolate sauce, and well, I got one once, and the sauce squirted out the bottom of the crepe onto my pants. That’s how I came up with the name for the food truck.

You can put whatever you want in a crêpe. That’s the beauty. It’s the blank white canvas of cooking.

I don’t sweeten the batter, but some people will try to convince you to put a few tablespoons of sugar in for the sweet ones. I think it makes them too sweet. People tend to make them too thick at home, too. Don’t fill the pan completely with batter. Just pour in enough to fill it about two thirds then tilt the pan so it covers the rest of the bottom. You’ll notice one side of the crêpe is fairly uniformly colored and one has brown polka dots. I’m not exactly sure why, but I like serving them spot side up.

This is the way Chef Philippe taught us to make crêpes at pastry school in France.

1. Mix ingredients in a blender until combined. Let stand at room temp for about 30 min.
2. Heat a flat, hopefully cast iron, pan. Brush on some melted butter.
3. Laddle in enough batter to fill about 2/3 of the pan, and then tilt the pan and rotate it so the batter runs around the edge.
4. After a couple minutes, flip it. Monitor the heat of the pan, to make sure it doesn’t get too hot and burn the crêpe.
5. Keep the finished crêpes warm in a stack by the stove until ready to serve.

Finish as you wish. Lemon juice with powdered sugar is a classic. The other one I did was raspberry, mint, honey, and cream. Everyone loves Nutella. Dulce de Leche is good on a crepe, too, with a banana or guava. 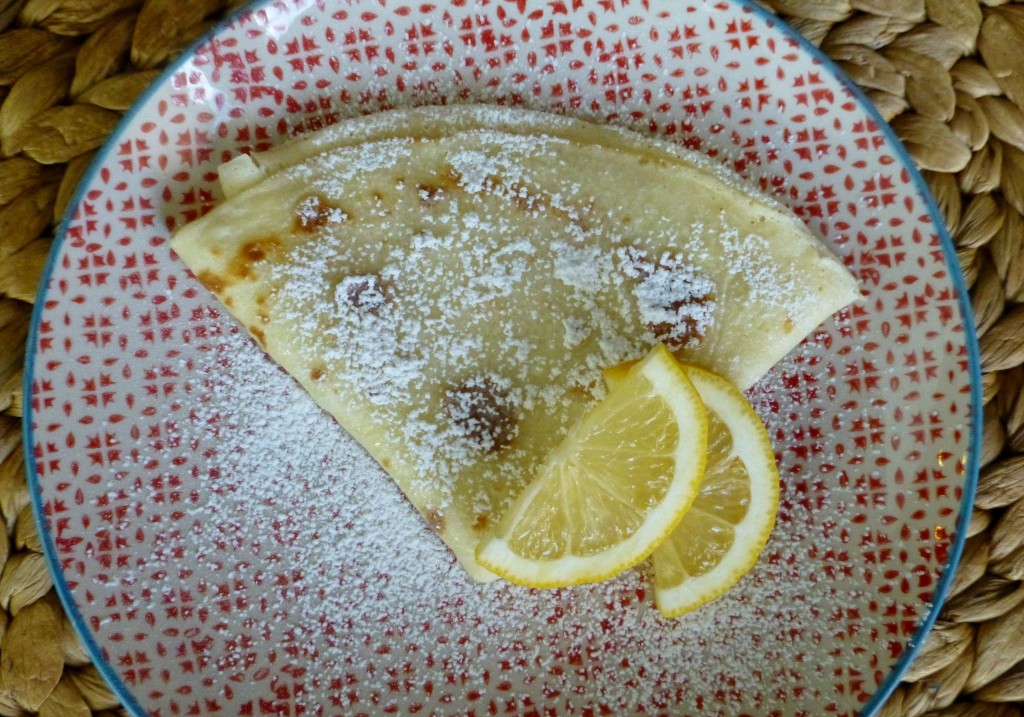 Lots of cultures have a version of the crêpe. In Russia, they have blinchiki and blini. They put some sour cream in the batter, and serve them savory with ground meat or caviar, or sweet with jam or sweetened condensed milk.

When my friend and I were staying with Sonya and Alyam, our host family in Russia, Sonya was pretty much constantly cooking something delicious. Kushai! (Eat!) was one of the first words I learned there. It’s pronounced like “coucher” from that “voulez-vous coucher avec moi” song. Sonya’s sister, Raya, would come to help cook, too, and prepare these massive feasts. Some of the things they made were: blini (crêpe), peremech (meat doughnuts), borscht (beet and meat soup), and holodets (meat jelly)… Ok, so I know “meat jelly” doesn’t sound amazing, but it was one of my favorite things.

One of the biggest problems with translating a recipe from one country to another is not the language barrier, or difference in measurement systems, but the difference in products. The ingredients vary in different countries from the milk and butter to the cuts of meat. Say that your Italian friend emailed you an authentic limoncello recipe and it calls for 6 lemons. The lemons at a market in Sorrento, Italy are the size of grapefruits, and their skins are bumpy and a paler yellow. Yeah, it’s the reason they have great limoncello there, but it’s a problem when you’re trying to copy the recipe back in the States.

You could try to import the ingredients, like they do for a Napoleon pizza still, except in the case of lemons you’d have to smuggle them in your suitcase, since it’s produce… Bad example.

Instead of trying to duplicate it exactly, though, take that same limoncello recipe, call it AZ limoncello, use McClendon’s local lemons, and accept that it’s going to taste a little different. Who knows, you might like it better. So don’t worry that you’re not using Russian beets for your borscht. You’re making your own version. If you still have an urge to have that authentic homemade Italian limoncello, though, I guess that’s what traveling’s for…

BORSCHT
We had borscht at a restaurant and then Sonya’s homemade version. There was no comparison. Hers was so much better. Her borscht cures sickness. Seriously, we were starting to get run down from our trip, and it made us better. She said the trick to getting a vibrant red color is to saute the beets first. She’s a very neat and resourceful cook. She’ll keep all the vegetable scraps, like the ends of the carrot, inside the outer leaf of the cabbage, to make the clean up easier.

1. Simmer the beef shank in a pot of salted water with a quarter of a whole onion for 3 hours.
(That first step was probably a deal breaker for some of you. You’re thinking, “We’re already 3 hours in and we haven’t even gotten to the second step?” You have to treat soups like a rainy day project. Someday when you’re going to be around the house, doing yard work, or watching football or something, you make soup. You do a little, then let it simmer, do a couple more steps, and come back.) If the shank is bone-in (better), then leave it whole. If boneless, then cut it into larger pieces before tossing in the pot.
2. After 3 hrs, skim off the fat and discard the onion. If bone-in, remove the shank meat and bone, and cut the meat in pieces. Return the meat to the skimmed off beef broth. Give the bone to the dog.
3. In a pan, melt the butter and saute the onions along with 1/2 the shredded beets.
4. Then add the tomato paste. Sonya says she uses fresh tomatoes in the summer, and paste in the winter.
5. To the pot of beef broth, you’re going to add the vegetables starting with what needs to cook the longest to the shortest, adding some water if necessary. Start with the cabbage, then a few minutes later the potatoes, then the carrots, beets, sauteed onions/beets, garlic, salt, and fresh herbs. Simmer until everything is tender.
6. Like most Russian foods, serve with sour cream.

RIBOLLITA
This is the way Giovanna taught me and my friends, Aida, Liam and Helle to make ribollita (Tuscan bread and vegetable soup). She was the mother of one of the owners of the restaurant I worked at in Colle di Val d’Elsa, and she became our adopted Italian grandmother. Her house was so homey. An old recliner sat next to the fireplace where she would heat up bread on a grate over the embers. And she’s one of the few people I know with a professional meat slicer in her kitchen. She was serious about her prosciutto. Learning to make ribollita at Giovanna’s house was my favorite moment in Italy, hands down.

Don’t freak out that nothing’s measured. That just means you have to pay a little more attention, and taste it along the way. That was the secret to Giovanna’s cooking. She was constantly tasting it, and adjusting here and there. I’ve included some pictures, so you can see what it should look like. We made a huge double batch that day, so I adjusted the proportions. If you’ve never made soup before, then this may not be the best recipe to start with, but give it a shot. 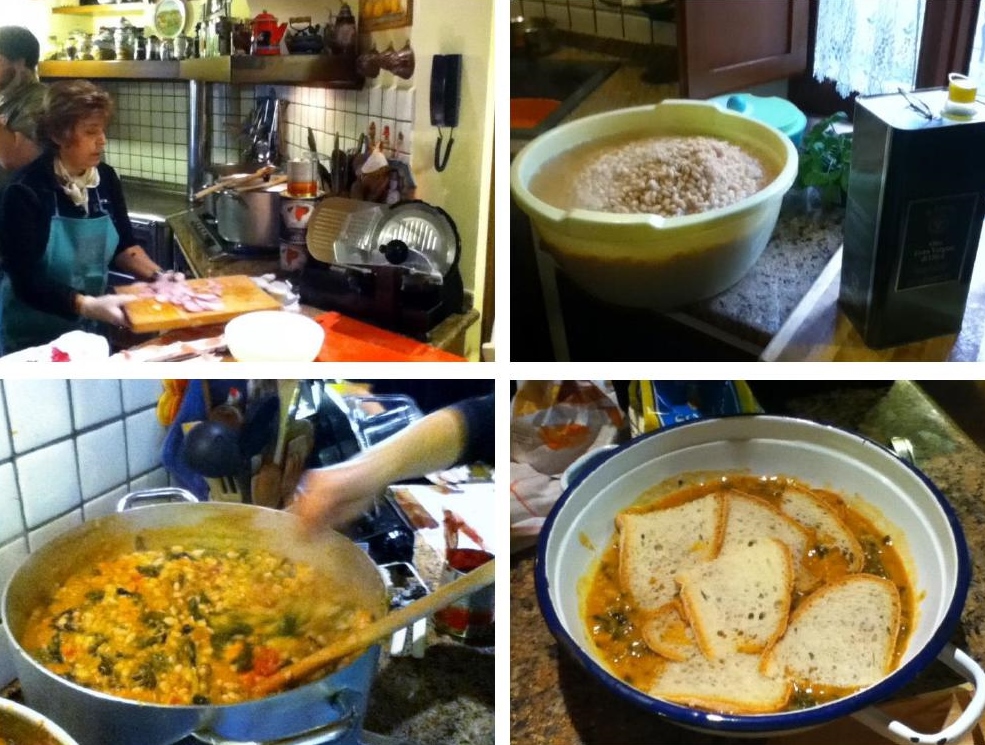 + Beans (white or red) – soak overnight in medium sauce pot then boil for 1.5 hours until soft.
+ Red onions – roughly chop a couple and sauté in a fair amount of olive oil with a ham bone (or chunk of prosciutto) for a few minutes in a separate, larger soup pot.
+ Add a few cloves of chopped garlic and some salt to the pot and continue to sauté.
+ Cut and wash a head of verza (savoy) cabbage. Cut out the hard stems and separate the hearts. Add the hearts to the pot first, and then the rest of the chopped cabbage. Cook down.
+ Wash the same amount of black cabbage (kale) and Swiss chard. Strip out the stems with your hands and chop (not too small).
+ Add a couple stalks of chopped celery (including the leaves) and some chopped carrots to the pot.
+ Add a large can of tomato puree (buying canned whole roma tomatoes and pureeing them yourself is better than the pre-pureed stuff). Add a little tomato paste.
+ Take half of the pre-cooked beans and puree. Then add the pureed beans and whole beans to the soup pot.
+ Season with salt, black pepper, and peperoncini (dried, not pickled).
+ Pour in water to cover and simmer for 3 hours, stirring periodically.

To serve the ribollita, thinly slice some bread and line a bowl. Pour in the hot soup and gently incorporate the two, so it’s thick. Enjoy.

Well, those are some of the recipes I learned overseas. I love learning recipes from different people. They’re like extensions of Giovanna, Sonya, Raya and Philippe’s personalities. If you have any recipes you want to share, please tell me!